Windows 8 is a personal computer and tablet operating system developed by Microsoft Corporation. It was released for worldwide availability on October 26, 2012. It's successor, Windows 8.1, was released on October 17, 2013 as a free update for most Windows 8 users.

Windows 8 was intended as a unified system for both PC and tablet computing. Upgrade paths to Windows 8 were made available from Windows 7, Windows Vista and Windows XP.

Windows 8 introduced major changes to the operating system's platform and user interface in order to improve its user experience on tablets. Windows 8 notably introduced the Start Screen, a customizable launch pad for applications based on a tile oriented interface. However, Microsoft chose to remove the traditional Start menu, and the new user interface was criticized for being potentially confusing and difficult to learn, particularly on traditional desktop computers.

The release of Windows 8.1 restored the traditional Start button to the desktop, added the ability to boot into the classic desktop mode instead of directly into the Start Screen, and added more customization options for the Start Screen itself.

How to Update Windows 8 Drivers

A driver is software that tells your computer how to recognize and communicate with a particular device such as a printer, graphics card or network interface card. Since there are myriad hardware manufacturers of varying sizes and origins making those kinds of hardware devices, it can sometimes be difficult and time consuming to find the correct driver and version for your specific operating system.

Usually, the Windows Update feature is the best starting point to upgrade device drivers. Users can launch it from the Start button:

Windows Update will detect and download any available driver updates for your system - but only if the manufacturer has registered their drivers with Microsoft. Unfortunately, many manufacturers, especially smaller and overseas ones, do not register their drivers through Microsoft. That means users need to find the correct drivers themselves from the manufacturer's website or a driver archive site such as DriverGuide. Then the user needs to install them manually.

Once you have found the correct driver and downloaded it to your computer, you can use the Windows 8 Device Manager install drivers manually. 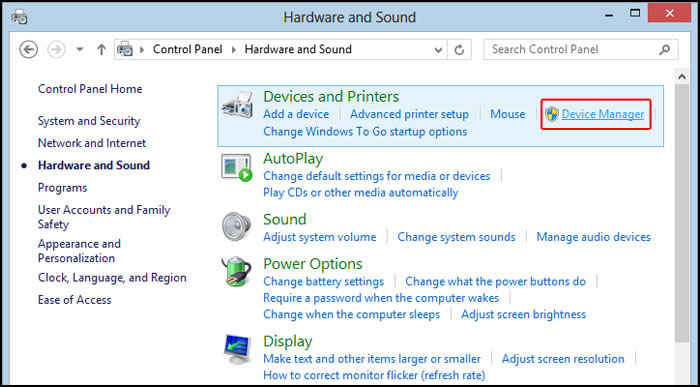 How to Setup & Fix Miracast on Windows 10 How to Take Screenshots in Windows 10 How to Export Chrome Bookmarks How to Connect Bluetooth Headphones to PS4 Fix "Your connection is not private" Error in Chrome Enable Adobe Flash on Chrome, Firefox, Edge, Internet Explorer and Opera